Mean Girls is about Cady Heron, a young adult who has been homeschooled as her parents lived in Africa. I don’t know why I’m writing this, because ya’ll have bloody well seen it. Anyway, she encounters the ‘Plastics’ which are the Queen Bees of the school, and shit happens.

***Beware Ye All Who Dare Enter Below, For Below Lay Spoilers***

I fucking love this movie.

I know what you’re thinking. 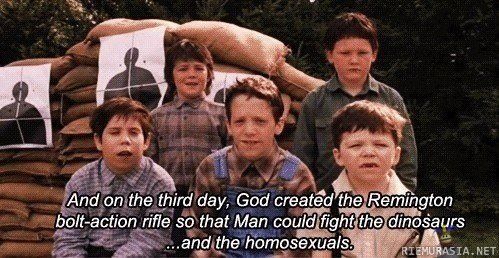 Also, I cannot imagine Lindsay Lohan ever being in Africa or poor or like even a real person.

Anyway, I’m not gonna lie, high school wasn’t the best for me – I mean, once, a guy named James Miller screamed at me in the middle of SOSE in Year 8 when a teacher tried to assign a seating plan, calling me “ugly”, cause being ugly is a disease, you see, and he was afraid of catching it, and that was a not-so-bad day in all honesty – but seriously, American movies, do you fucking hype up this shit?

Or are there really like cliques and shit? Is it really this bad? I really wanna know.

Anyway, Cady meets Janis and Damian and bumps into Ms Norbury, who immediately thinks the new girl from Africa is like the only black student in the class.

By the way, it only counts if you saw a nipple.

I really love the actress who plays Janis, I was so excited when I saw her in True Blood. 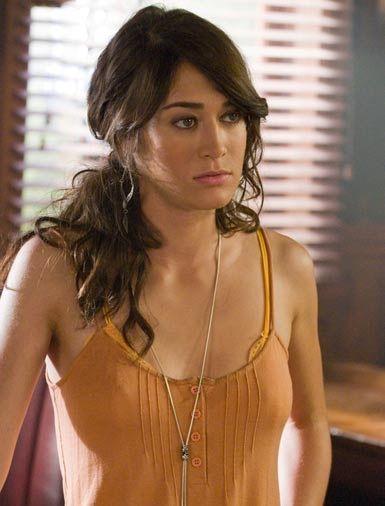 Because you will get pregnant.

Oooh, now we meet the Plastics!

Regina George, Karen Smith and none for Gretchen Wieners.

I don’t think my school had a Queen Bee, not really. I mean, there were definitely popular girls at my school, but I can’t really recall anyone standing out in particular.

I love Janis’ guide to the cafeteria. Also, don’t you guys ever have lunch outside in America? 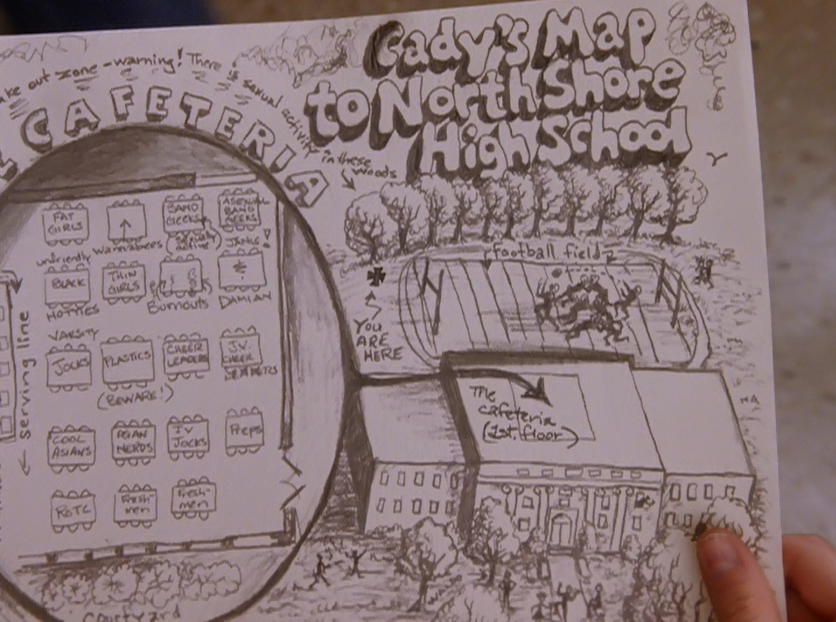 Cady meets the Plastics because Jason starts sexually harassing Cady in front of them, and Regina George takes a little interest in her.

The Plastics invite Cady to sit with them all week, and Janis thinks that it’s a great idea to spy on the Plastics.

Anyway, Cady meets Aaron, which sounds an awful lot like Erin when Americans say it, who looks sexy with his hair pushed back.

Gretchen, of course, immediately tells Regina that Cady likes Aaron, because of course she does.

Cady goes shopping with the Plastics.

The Plastics sees Jason going out with Taylor, and Regina calls Taylor’s mum saying she her test results are “really serious”, but you can tell this plays on Cady’s conscience.

I love Parks & Rec (Mrs George, in case you have no idea what I’m referencing). 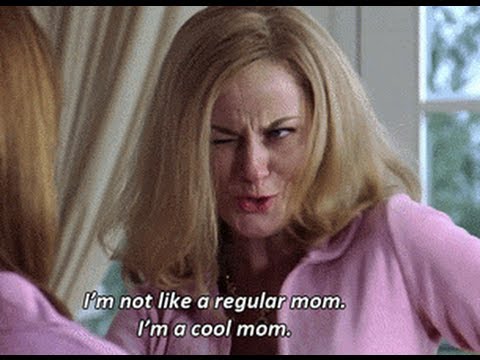 Why would Cady not know anything just because she lived in Africa? I’m pretty sure they get things like radio and TV in Africa.

Which is a continent, by the way.

Regina sets Cady up with a three-way call with Gretchen so that they can try and trap Cady.

Cady doesn’t know about the “Slut Rule” for Halloween, and I feel like that’s a lot of slut-shaming.

Regina bumps into Aaron and tells him Cady’s a stalker and I feel like Aaron only believes her because Regina is, like, really pretty.

I feel like Janis’ plan to a destroy Regina George could literally work on Trump.

I think she’s onto something.

Cady works to try and destroy Regina because she likes Aaron and hates Regina.

Regina tells Cady about how she and Janis used to be best friends, but because Janis wanted respect and friendship, Regina went and told everyone Janis was a lesbian and tried to ruin her life.

Gretchen accidentally kicks Jason in the head with the CD player which I think is great, but then Cady saves the day by singing the song.

Regina yells at Gretchen that ‘fetch will never happen’ and Gretchen wants to stab Caesar, and then Gretchen cracks and tells Cady that Regina is cheating on Aaron.

Cady starts to fail Math so that Aaron can tutor her, and I don’t get that, and after making out with Aaron she tells him that Regina’s cheating on him with Shane Oman.

I’m okay if I’m smarter than the person I’m into. If they’re not okay with it, that’s on them.

Aaron breaks up with Regina.

What the fuck is half a virgin?

Can someone please explain?

Karen has ESPN or something and her breasts can tell when it’s raining.

Oooh I love the Burberry skirt Gretchen is wearing when she’s announced for Spring Fling or whatever the fuck the dance is.

The shop assistant tells Regina George to try ‘Sears’, which is obviously insult, but I don’t get it, because I don’t know what Sears is.

Cady gets revenge on Regina by doing a three-way with Gretchen being the silent one.

Regina gets taken down and Cady becomes the new Queen Bee.

Janis and Damian confront Cady about being a shady bitch, and Damian wants his pink shirt back.

I like how Janis says that the only difference between Cady, Regina and Janis is that Regina and Janis know that they’re not great people, who do shit things, but Cady likes to pretend she’s nice, and I had a few friends that were/are Cadys.

Regina George sets up Cady, Gretchen and Karen with the Burn Book, and then photocopies the entire Burn Book to post it all over school. 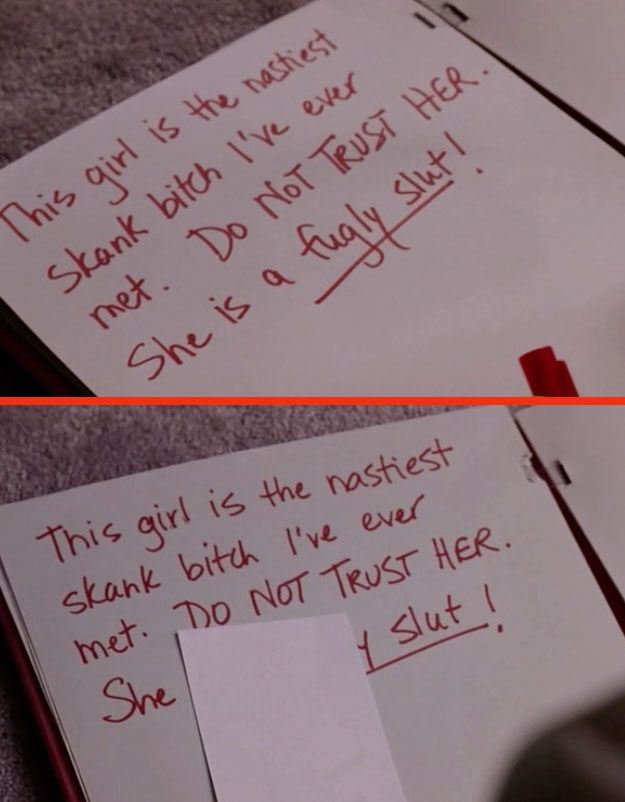 You will get chlamydia. And die.

Why the fuck would anyone make out with a hot dog?

Ms Norbury sees the drug pusher thing and immediately knows that it was Cady, and she’s so hurt, and I feel so bad.

Regina watches everyone go insane and start attacking each other with pleasure, and I’m not lying, this has been my revenge fantasy more than once.

Except real life has very real consequences to setting fire to the rain, you know?

Also, there is no way all these problems would be solved by 4.00pm in the afternoon.

SHE DOESN’T EVEN GO HERE! 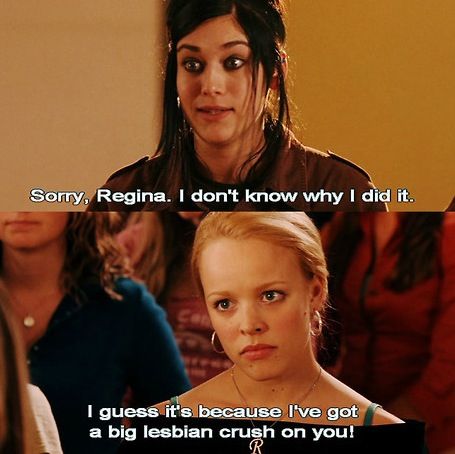 Also, I feel like they have to work really, really hard to downplay Janis’ attractiveness, because the actress who plays Janis is crazy beautiful.

And that’s how Regina George died.

Cady’s dad grounds Cady, but we later learn that he doesn’t actually know what grounding is, so I don’t get why he’d do it.

Because the allegations against Coach Carr were true, Ms Norbury has to be investigated, and then Cady comes forward to finally say that she wrote the rumour, which I find unlikely, but amazing.

Even being cruel happens.

What you do after that, that’s what counts.

Cady has this revelation that the only thing you can do is focus on the problem in front of you, and I was originally going to make fun of it, but the way she finished it made me realise it was exactly what mindfulness is about.

After winning Mathletes, everyone goes to the Spring Fling.

Cady wins Spring Fling Queen and there is literally no way there’s enough pieces of tiara for as many people as Cady gives it to, but okay.

Cady makes up with Damian and Janis, and I like how they forgive her.

Cady and Aaron get together.

The Plastics get broken up, and everything is perfect, until Cady jokes about hitting the ‘new Plastics’ with a bus.

And on Wednesdays, we wear pink.

The worst thing about this movie: The repeated use of ‘retarded’. I can’t really defend it, because I’ve used it more times than I care to count, but it’s definitely cringe-worthy.

What would you like this 90’s Bitch to review next? What are your problematic faves?

“Sorry, I use humor to deflect my insecurities. Plus, I’m hilarious, so don’t hate.” View all posts by thingscarlaloves

“Sorry, I use humor to deflect my insecurities. Plus, I’m hilarious, so don’t hate.”