One of the hardest things about being chronically ill is that you’re constantly being compared to someone else’s ability, who has the same or similar condition to you.

The judgement of what we “should” be able to do isn’t just enforced on us by others; it’s also enforced by ourselves.

Like I’ve said previously, I have three auto-immune disorders.

After contracting meningitis and encephalitis, permanent damage was left on my body, which allowed reasonably dormant conditions to flare up – or at least, that’s what my fifth sleep specialist told me (he was also critical in finally diagnosing me properly).

As a result of one of my conditions, I do not always have full and proper function of my body. I know I’ve mentioned before that I suffer from both cataplexy and sleep paralysis.

I remember one night, waking up like I do when I’m suffering a sleep paralysis-related hallucination, and a man was standing over the bed, but on my husband’s side (he was only my fiancée at the time, however).

I was laying frozen in bed, and it was as if I knew exactly what was going to happen, even though I’d never had that particular hallucination before.

I’d woken up, more than once, with a man standing over my bed.

Sometimes he’d even have an axe in hand.

Sometimes he’d crawl into my bed.

Sometimes he’d just reach out, trying to grab me.

I’d scream and fight and thrash and sometimes even break things. More than once, I’d have a roommate coming running into my bedroom because of it (thanks, Jas – love you).

But this time, it was like my mind knew it was different, and I watched, entirely frozen, as the man standing over my husband dumped a bucket filled with hundreds of spiders onto the bed.

My greatest fear is spiders.

Arachnophobia does not begin to come close to describing the fear I have of spiders.

In fact, my fear is so intense that if we’re around spiders for about three months, I will fucking condition you to be terrified of spiders, too.

I will Pavlov’s dogs you, but with spiders and without gross mutilation.

Anyway, the fear of the hundreds of spiders crawling across the bed broke the freeze held over my body (but not the hallucination), and I literally threw myself out of bed so hard that I hit the side wall before falling.

I had bruises over my entire body, and partially dislocated my hip.

Below: Obviously not the injury I’m talking about, but still, a pretty decent bruise.

None of this mattered, of course, because the spiders were still coming, moving their long, creepy legs across my beautiful, pink bedspread.

Said bedspread is below, if you can make it out.

I was still screaming, and I got up, trying to make a run for the door, for anything, for the outside, for freedom, for anything but what was happening.

I didn’t give a shit: The only thing going off in my head, other than excessive screaming that if we hadn’t been living in Emerald would probably have sparked multiple phone calls to the police because if we’d had close neighbours, they would’ve thought for sure my husband was definitely murdering me, was the need to get the fuck out.

Scott, who had been awoken by the screaming, the falling, and the sound of me hitting the wall, knew that I was having a hallucination – I’d had them before, and he knew that turning on the light would often jolt me out of whatever I was seeing – but it didn’t work, and my mind didn’t even register the light had been turned on. I was still deep in my hallucination, and I was desperate to escape the suddenly spider-infested house.

After being woken up by a frantic, hysterical and now injured partner, Scott knew it was a hallucination, but he didn’t know what it was (because, obviously, I can only see it), and while he’d tried calming me down, if you’ve ever seen me react to a spider, you know that I can’t be reasoned with.

After briefly fighting with me, as I was still desperate to escape, Scott had no choice but to grab me, throw me onto the bed, and pin me down.

While I was still screaming and fighting him.

Because he’d just thrown me on a bed of crawling, moving, big, wolf spiders, and how could the fucking bastard do such a thing? (Note: Any searches for wolf spiders are at your own risk. I’m Australian, not American, so remember the size of our shit.)

He kept screaming my name, and asking what was wrong, and eventually, finally, I could hear his voice. Once I started focusing on his voice, the hallucination around me broke; I realised the light was on, and everything was normal.

And, far more importantly, no spiders.

And I can fucking hear you judging, Karen, but like I told you last time, there’s a point.

There’s always been a point, Karen, just let a girl get to it.

And some of you will be reading this and thinking, ‘I have sleep paralysis, but that’s never happened to me.’

And some of you will be reading this and be thinking, ‘That sounds fucking awful. Thanks for that you heinous bitch, I’m never gonna fucking sleep again.’ 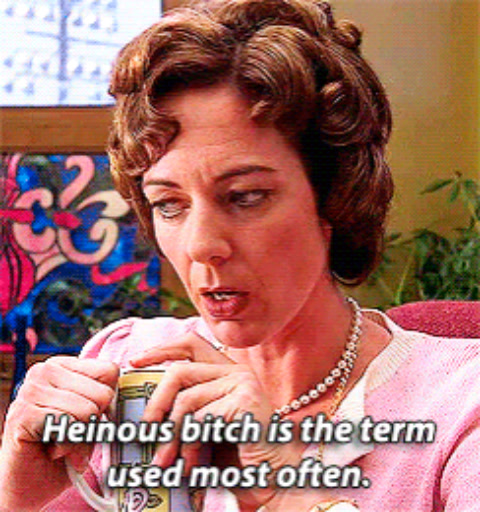 It’s different for everyone.

I’ve only ever had one auditory and visual sleep-related hallucination.

The rest have always been only visual.

I have no idea how ‘normal’ or ‘textbook’ I am or am not.

The only thing I’m aware of is that it is normal for me, and as a result of severely hurting myself, and the fact that my hallucinations progressed a lot more after the trauma of certain people’s actions were inflicted on me, I became a danger to myself, and now have to take sleeping medication (which, with how many times I’ve fallen down our stairs now, is probably a great fucking thing. I can’t imagine what I wouldn’t break if I was running out of my room from spiders and hit the staircase).

The sleep paralysis and hallucinations are part of one of my many chronic illnesses.

I know, for a fact, that there are some people with my exact condition who suffer far more than I do.

I also know, for a fact, that there are some people that are able to live a better life than I currently can.

And I hear ya Karen – what does any of this have to do with the fucking celebrities I mentioned at the beginning?

She required a kidney transplant to save her life.

I have two friends that I know have lupus, and neither one has needed a kidney transplant.

I probably have more than one friend that has lupus, and they just haven’t confided their diagnosis in me.

I also know people who lead full, happy lives with less-severe symptoms that don’t impact their day-to-day life the way it does with others.

I know people with MS who you wouldn’t even suspect that they suffer from such a horrible condition.

There are people I know with fibromyalgia that can’t get out of bed, can’t participate in basic activities, can’t work.

There are people I know with fibromyalgia that get up, go to work, and suffer, but can still function.

Like with the previous two, there’s also people in between – those that can do a bit more, but aren’t capable of completing day-to-day activities without serious respite.

Yet, each one of these people I’ve mentioned are famous.

Lady Gaga performed at the Oscars the other day, and she’s starred in a movie, written music, won awards, and more.

Selena Gomez was on stage, performing, soon after her kidney transplant. Since then, she got back together briefly with Justin Bieber, went travelling a lot, and has released more music.

She’s also besties with Taylor Swift, which makes me jealous. I want to be best friends, too.

Selma Blair has starred in multiple movies, has recently finished filming the TV series Another Life, and has been doing interviews to raise awareness surrounding MS.

All of these conditions I’ve mentioned are life-long, chronic, debilitating, and sometimes even carry death sentences with them.

And yet, these three women are defying everything.

So we, as a society, look at those around us, and we compare.

We compare how ‘strong’ we are, or reflect on how ‘weak’ we are, for not being able to do the same, to accomplish the same.

Except, even though these women are defying everything, it’s also different for them, too.

Like with so many of us, Selena Gomez ran into serious, life-threatening complications, and had to have a kidney transplant.

Sure, she was able to put a hell of a performance on shortly after such a serious surgery, but she had to have a fucking kidney transplant, people.

The tablets and procedures and tests she’ll need to take for the rest of her life now?

They’ll forever dominate her life in some way now, even if other people who have the exact same auto-immune disease will never have the same complications.

So, whether you’re suffering from a physical or mental illness, or are perfectly happy and healthy, remember that:

And for those that do suffer a debilitating condition: Remember, you don’t get to fucking gatekeep this shit. If someone has it better than you, you should be happy for them. Don’t invalidate their experiences – of which you likely can’t see, by the way – simply because they differ from yours. And if you do have it worse than those around you, you don’t get to fucking gatekeep the fact that yours is somehow worse, because guess what?

Someone’s always going to have it worse than you, and you don’t get to fucking judge.

“Sorry, I use humor to deflect my insecurities. Plus, I’m hilarious, so don’t hate.” View all posts by thingscarlaloves

9 thoughts on “#ButDon’tYouWantToGetBetter: But What About Selena Gomez, Lady Gaga, Selma Blair and et al?”

“Sorry, I use humor to deflect my insecurities. Plus, I’m hilarious, so don’t hate.”